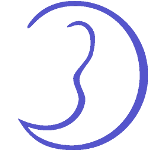 These beautifully printed calendars show the exact shape of the Moon for each night of the year, screenprinted in silvery metallic ink on a deep midnight blue background. As well as dates and days of the week, the calendar gives the exact times of the full, new and quarter moons, and the times when the moon changes from one sign of the zodiac to the next. I've been producing them since 1989. The posters measure 12 inches by 33 inches (31cm x 84cm) (approx.), and are both lovely and useful!
Click here for prices and ordering information.

The date and time of the Sun’s movement into each zodiac sign is printed at the bottom of the calendar - these of course include the solstices and equinoxes (in March, June, September and December) - and a key to the zodiac symbols is also given. When there’s a solar or lunar eclipse, the type of eclipse and time of greatest eclipse are shown instead of the full- or new-moon time, this being just a few minutes different. (See the FAQ for why.) The moon’s phases are drawn for midnight, and the last one shown in each month (for 24:00 on the last day) is pictured again at the top of the next month’s column.

All the times shown on the calendar are in Greenwich Mean Time. It’s a “Northern-hemisphere” design, in the sense that the shapes would appear back-to-front (or upside-down) in the Southern hemisphere - though in any case the moon is usually seen with the bright side turned downwards a bit, toward the horizon, the exact angle depending both on your latitude and on the time of night. The calendar is nevertheless useable anywhere in the world, since the moon’s shape appears (almost exactly) the same wherever you are on Earth.

A Southern-hemisphere version is also available, however (pictured right), which shows all the shapes the other way up, and uses New-Zealand standard time-zone (12 hours East of Greenwich).

The average time from one full moon to the next is approximately 29 days 12 hours and 44 minutes (a “synodic month”), which is almost a whole day less than the average calendar month, and this is why the pattern on the calendar slopes upwards to the right. This pattern continues if you put calendars for successive years side-by-side. Twelve lunar cycles - from new to full and back to new again, 12 times - together take about 10.875 days less than one whole year (a year being the time it takes for the Earth (along with the Moon) to orbit the Sun, about 365.2425 days).

Seen from Earth, the moon always moves forwards through the zodiac (unlike the planets, which sometimes appear to go backwards, or retrograde, against the background of the “fixed stars”). She spends a bit more than two whole days in each zodiac sign, completing the cycle through all 12 signs in one “tropical month” of on average, 27 days 7 hours and 43 minutes. The time when the moon moves into a zodiac sign from the previous one - an “ingress” - is shown on the calendar by the Zodiac symbol of the new sign, with the time printed next to it, using the 24-hour clock.

The calendar uses the usual “tropical zodiac”, in which the Sun moves into Aries on the Spring equinox each year. Some people (biodynamic gardeners for example) are interested in the sidereal zodiac, which corresponds instead to the constellations of stars seen in the sky. The tropical and sidereal zodiacs coincided in AD 221 (allegedly), but due to the precession of the equinoxes, the tropical zodiac has moved backwards relative to the sidereal one by nearly 25 degrees. The moon thus moves into any particular sidereal sign about 1 day and 21 hours after moving into the same tropical sign (the one shown on the calendar).